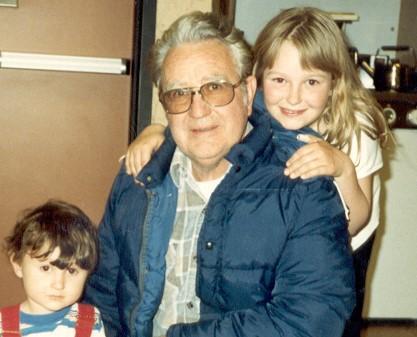 John was born in Lawrence, Kansas, but spent most of his youth in and around Cotapaxi, Colorado, where his parents had a ranch.  As a consequence, he spent a good deal of time on horseback.  He first met his future wife, Leora, when her family visited friends in Cotapaxi.

In High School, in Cotapaxi, John and his friend Don DeVore were constant companions, played the same sports, both entered the military in World War II, and continued their friendship for the rest of their lives.

In July 1943, before graduating from high school, John enlisted in the US Navy.  He trained for service as part of a gun crew and served as a gunner on several ships during the war.  John saw a great variety of service, first on the USS Katlian, patrolling the West Coast for Japanese submarines, then as a gunner in convoy UGS 30 to North Africa, and later aboard first the SS John W. Cullen and finally aboard the SS James Shields, both in the Pacific fleet.  In the relatively short span of 2½ years of service he earned service ribbons for the American area campaign, the European/African campaign, the Asiatic/Pacific campaign, the Liberation of the Philippines, and finally the Victory ribbon, presented for servicemen who served in the war.  In the same period, he completed the necessary course work to obtain his high school diploma.

When on leave during his military service, John renewed his friendship with Leora May Reid of Rocky Ford, Colorado, and after his discharge from the Navy they were married November 17, 1946.

In the early years, John and his family lived in Pueblo, Colorado, where all four of their children were born:  Vicky, John Jr., Herbert and Deborah.  He worked for Colorado Fuel and Iron (CF & I), took night classes through the local college, and became a Master Machinist.  They also had a small farm and were very active with 4H, where Leora taught cooking and sewing and John taught livestock.

Not long after the birth of their youngest daughter, John and his family moved to Richland, Washington, where John worked for General Electric Company.  John worked as a machinist at the Hanford facilities near Richland until his retirement in 1987.

John and Leora were longtime members of South Side United Protestant Church in Richland.  John was also a Master Mason and member of Pueblo Lodge #31 of Pueblo, Colorado, for 66 years.  As a Mason, he worked locally in Richland as an advisor to Job’s Daughters Bethel, a Masonic organization for young women.

After retirement, John and Leora bought a summer home in Homer, Alaska, and a 40 foot twin diesel pleasure boat.  They wintered in Richland and spent their summers in Alaska, fishing and spending time with their two sons John Jr. and Herbert, both of whom had jobs on the Alaska Pipeline.

In 2003, John and Leora moved permanently back to a new home in Richland where they lived until they retired into Brookdale at Canyon Lakes, in 2015.

John was preceded in death by his wife of 69 years, Leora May (Reid) Hemphill.  John is survived by his sister Grace Zach of Ft. Collins, Colorado, all four of his children; Vicky (Walt) Cooley of Winnemucca, Nevada; John (Diana) Hemphill of Tucson, Arizona; Herbert Hemphill of Homer, Alaska; and Deborah (Mark) Schwartz of Meridian, Idaho.  He is survived also by 9 grandchildren and 25 great-grandchildren and many more distant relatives.

Services will be at Einan’s Sunset Gardens Event Center, Richland, Washington, Monday July 26, 2021.  There will be a Celebration of Life at 2:00 pm (open for viewing beginning 1:30), followed by a short graveside service with military honors.  A reception will follow at the Event Center.

In lieu of flowers please send donations to Heartlinks Hospice or the Shrine Hospitals for Children.