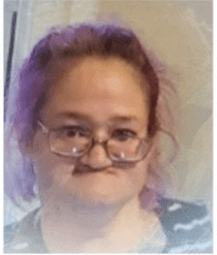 Molly Marie Henderson, age 41, passed away unexpectedly at home on August 9th, 2021. She had been battling many illnesses that finally became too much and overtook her.

Molly was born March 26th, 1980 in Pasco, WA to her parents, Janet and Kenneth McInturf. She attended Pasco High School from 1996 to 1998. Molly married Danny Henderson on July 17th, 1999 in the front yard of her grandparent’s home.

At times Molly rode with Danny, a long-haul truck driver, getting to see different parts of the country. Molly was a kind person. She helped many friends and family whether through child care, being a shoulder to lean on, or simply giving someone a ride. When Molly gave her friendship, it came with a deep commitment that no one could possible understand. No matter what was going on in her life she would always be there when you needed her. She enjoyed crocheting blankets to give as gifts, diamond painting, country music, car races, Pepsi, and her most recent love, coffee!

The family will have a small celebration of life for Milly at one on Saturday, August 21st, 2021. It will be an informal gathering where you may come to tell your favorite stories and share your love for this truly caring individual. It will be held at Auntie Julie’s, as she would have wanted.