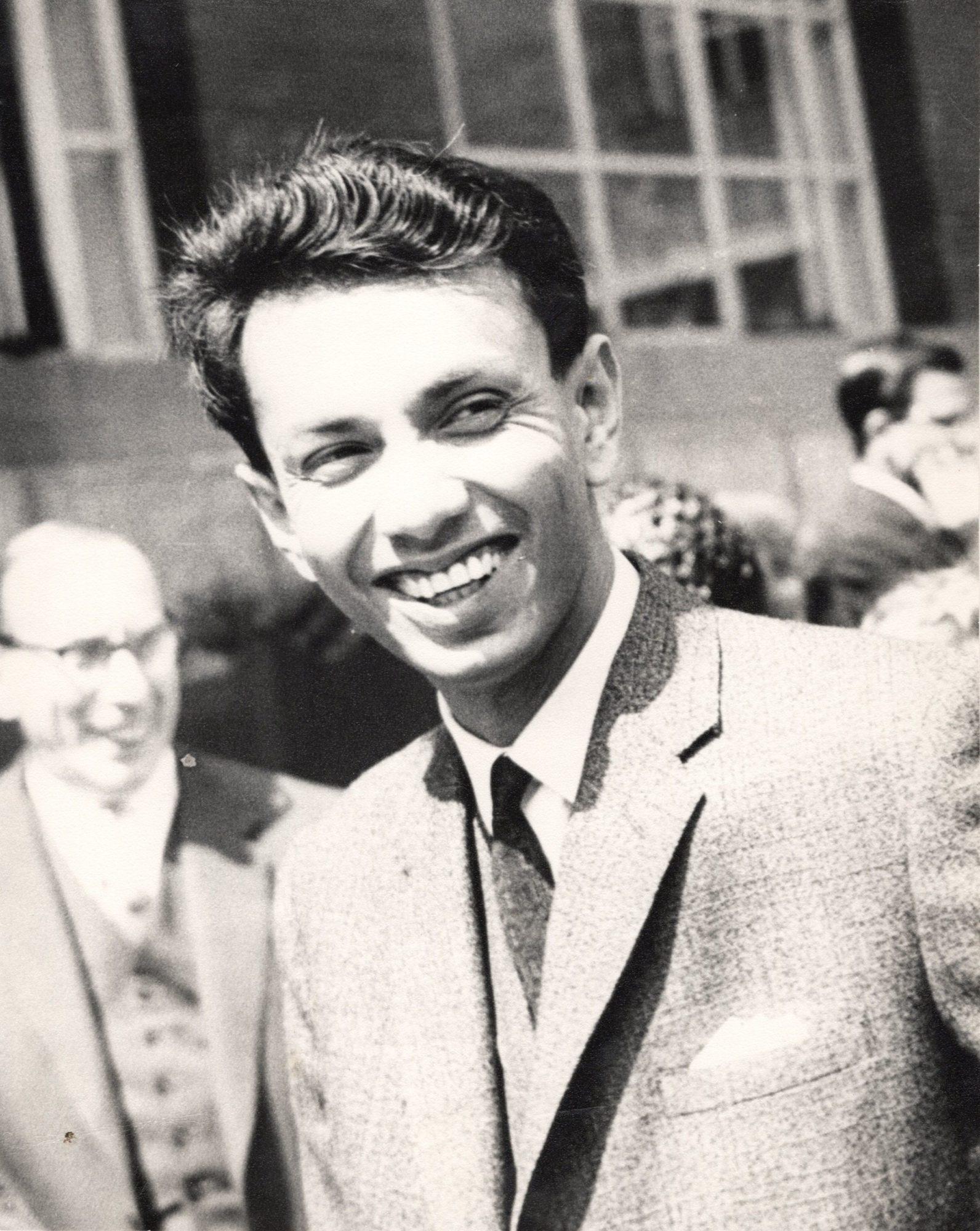 He began boarding school at the tender age of ten approximately 200 miles away from home. He would often tell the story of how, when his father would visit, he’d hide his lunchbox and bags in the hopes that his father would have to stay. But despite the initial loneliness, Anjan excelled at school. And notwithstanding his self-described introversion, was “the president of everything,” heading up numerous school clubs, sports teams, and even a college newspaper. He graduated high school in 1949, completed his undergraduate studies, and earned his M.D. from Calcutta Medical College in 1957 at the age of 22. After a general residency and a year teaching anatomy, he had saved enough for passage on a ship to the United Kingdom. When he disembarked in Dublin, Ireland, he had to adapt to a strange, cold country with its different customs and food. He remembered feeding shillings into a radiator to stay warm as he studied for the notoriously difficult FRCS (Fellowship of the Royal College of Surgeons) at Trinity College, which was necessary to practice surgery in the U.K. He was one of only two who passed, but, in a bout of pessimism, had not secured a job. A colleague with the opposite result told him to take his place in general surgery at Wigan Hospital in the north of England. And it was there, in 1960, that he met and fell in love with a beautiful nurse named Hilary Adele Skitten. He knew it was fate.

Anjan’s time at Wigan led him to specialize in neurosurgery; however, that trajectory meant he needed to leave the area to pursue career opportunities. Although work took him to Scotland and other parts of England, he kept up his correspondence with the lovely Adele and, eventually, she joined him in London and the two married in 1966. Later that same year, Adele bore their first child, a son, Dev Kumar. Frustrated by his experiences in London, Anjan wrote his friend, Dr. Tapan Lahiri, whom he had met on the journey from India to the U.K. a half dozen years prior. Dr. Lahiri encouraged him to come to the U.S., specifically to Kadlec Hospital in Richland, for they were in dire need of a neurosurgeon.

Anjan, Adele, and their infant son journeyed to Richland in 1967. Here, Anjan made himself invaluable as the only neurosurgeon in the area for many years. He was also an innovator. He persuaded Kadlec to invest in computerized tomography (CT scans) when they were exceedingly rare, established the area’s first pain management clinic, and was president (of course) of the Western U.S. Pain Society. He was a tireless, devoted, and compassionate doctor, often sleeping outside the recovery room of the patient he had just operated on to ensure he would be there if there were complications. Ultimately, Anjan practiced medicine for more than 60 years – even after giving up surgery, he continued to treat patients for pain. He believed strongly in being of service and helping others and never wavered in his commitment to his patients and practice.

But aside from being an exemplary surgeon and physician, he was brilliant, witty, and humane. He was a loving husband to Adele, a wonderful father to his four children, and devoted son and brother. He had a kind and silly sense of humor, a sort of playful innocence that endeared him to all who were lucky enough to experience this side of him, as he was often serious and reserved. He was the sort of man that children and animals took to immediately, as though they recognized a kindred spirit. He was a teller of wildly entertaining stories and groan-inducing dad jokes. Always a handsome man, when he smiled, he radiated an infectious joy. He loved games of all sorts and was surprisingly competitive for such a soft-spoken person. Many an unsuspecting challenger was soundly beaten in games of cards, pool, ping pong, and chess. He regularly played 5,000 games of Sudoku in a row without making a mistake. He enjoyed drawing and painting and, especially toward the end of his life, liked to sketch portraits of his friends and family. He was active in Rotary Club and, recognizing he struggled with public speaking, he joined Toastmasters in the 1980s and participated on and off in the club for the rest of his life. He remained open and curious until his last days, taking Spanish lessons online and reading about advances in medicine. He was, for so many of his friends and family, the best man we knew.

As with any life, there were difficult times, the most painful were being preceded in death by his dear brother, Soumitra Kumar Sen, his beloved wife Adele, and his adored son, Neel Anjan. But he believed he had had a good life and was very happy to have helped as many people as he did.

He is survived by his children, Dev Kumar, Robi Paul, and Paula Elizabeth Sen; his grandchildren Philip Josef and Sanaa Kumari Sen; his brothers Prabir Kumar and Ranjan Kumar Sen; his sisters Aparna Dasgupta and Sunanda Sen; and by many nieces, nephews, cousins, and dear friends the world over. We are all so grateful to have known him.