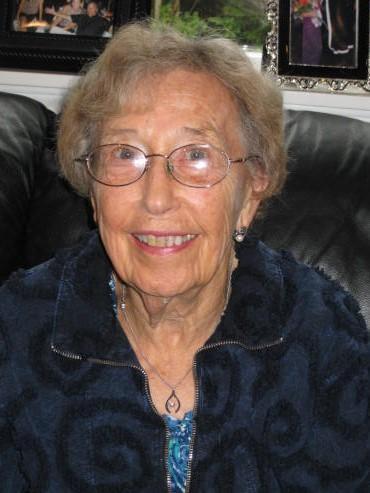 Eunice Louise “Lou” Daniel passed away on October 9, 2021 in Richland, Washington at the age of 95, following closely behind her husband of 71 years, J. Leland Daniel. She remained an inspiration to those around her with her upbeat, cheerful demeanor; her readiness to lend a hand; and her wry, clever wit that caught many people unawares.

Eunice was born on December 22, 1925 in South Bend, Indiana to parents Gustave and Olga Olund, the younger sister of brothers Robert and Norman. Her childhood was filled with running (never walking) around the neighborhood playing kick-the-can, tennis, ice-skating, and exploring the nearby beloved Rum Village Woods. Growing up surrounded by family and friends, Eunice remained loyal to both her Swedish and Midwestern roots for the rest of her life. She graduated from James Whitcomb Riley High School in 1944, where in her role as yearbook photographer Eunice faithfully recorded each and every student event. This was the beginning of her passion for documenting all of life’s moments through the lens of a camera. A true trailblazer, Eunice went on to receive a chemistry degree from Purdue University in 1948, and from there she was recruited for a job at the Hanford Site in Washington State.

Soon after college graduation, she and a friend boarded the train out west for Washington where they planned to work for a year. A short time later, however, Eunice met her future husband in the chemistry lab at Hanford, and her one-year stay became a lifetime. She and Leland were married in 1949 in his parents’ backyard in Spokane, settling in Richland where they went on to raise three children. They were true life partners and were often found side-by-side in various pursuits such as square, swing, and disco dancing; playing in a tennis league; embarking on cross-country road trips; traveling overseas; and participating in church study groups. As founding members of the local Inter-Mountain Alpine Club (I-MACs), “Lou” and “Lee” went on hiking, camping, skiing, and rock climbing excursions, later passing on their love of the outdoors to their children.

Her role as a mom was most important to Eunice, whether it was serving a family dinner at the dining table every evening, helping with school projects, sewing homemade Halloween costumes, throwing children’s birthday parties, or ensuring that every holiday and milestone was celebrated. She was also the ultimate volunteer –  in the classroom, at church, at the library, as Girl Scout leader, as student tutor, as an AAUW member… She loved working in her flower and vegetable gardens, as well as feeding the birds and squirrels that visited her yard. Always up for a new challenge, Eunice tried her hand at Japanese flower arranging, oil painting, ethnic cooking, macramé, and made a study of health, diet, and nutrition long before it became mainstream. She kept active with tennis, swimming, running, and Pilates well into her eighties. In the midst of everything else, Eunice went back to school to earn her Master’s degree in library science at the University of Washington, and subsequently took a job at the technical library at Battelle. There she once again proved to be ahead of her time, learning to utilize some of the earliest computer search engine capabilities to convert their card catalogue to electronic format. Whatever Eunice took on, she fully embraced!

Eunice’s zest for life, ready smile, and sly sense of humor will be greatly missed by her daughter Linda Post (Steve), son Jim Daniel (Brenda), daughter Debbie Finchamp, six grandchildren, nine great-grandchildren, and by her many extended family members and friends.  A celebration of her life will be held on Saturday, December 11th at 11:00 AM at West Side Church in Richland, followed by a Swedish-inspired luncheon*. Donations in Eunice’s memory may be made to SIGN Fracture Care, a locally-based humanitarian organization that she and Lee supported.

*Masks required for service and luncheon