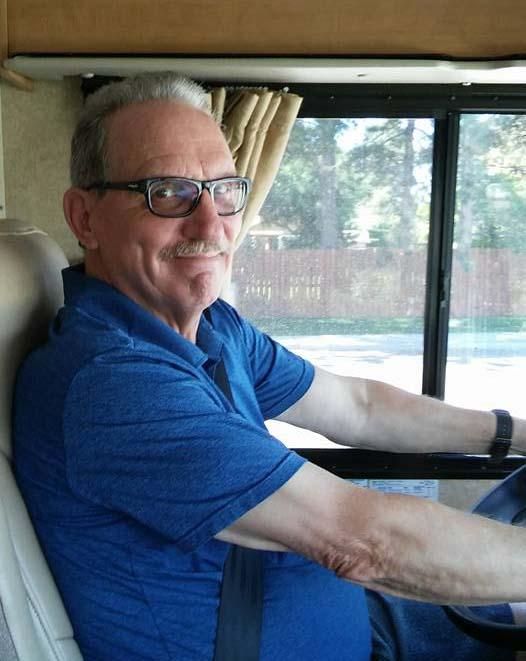 He was born the day after April Fools, 1946 (whenever asked his birth date, this is how he answered).  Romar Ermol Swarner was born in Fairbanks, Alaska when it was a Territory.  He was very proud of that fact and very proud of being an Alaskan.  He left his earthly body on October 21, 2021.  His father was Alfred Monroe Swarner and his mother was Maxine Dakota Faust.  He was the 3rd of 6 children.

Romar loved sports and played basketball and ran track in High School.  He lettered in track and basketball and was called “Franz”.  He still holds some records from his days on the track team.  He graduated from Lathrop High School in 1964.

Romar loved to go hunting and fishing with his father and brothers.  He was always sharing a memory of the hunting trips for sheep and moose.  The boys learned to cook on the hunting trips in self-defense.  Their dad would mix everything into one pan and cook it for a meal.  Romar was what you would call a “Salmon Snob,” he always asked at a restaurant if the salmon was wild or farm grown…

He went to the University of Alaska Fairbanks, then the University of Hawaii and then back to the University of Alaska.  At that time the Vietnam War was progressing.  He wanted to travel and so he took a leave from college and he and his brother Dennis traveled the United States.  They wanted to travel as long as they could before Uncle Sam caught up with them.  They had almost a year of memories before Romar went into the Army in 1968.  He served a year in Korea and worked on the DMZ as a Combat Engineer.  While in Korea, he trained with a Sensei (instructor) and received a black belt in Taekwondo.  For many years not many people knew that he was a Veteran, this would come out years later when our son Tyler joined the Army and went to war in Iraq.

After his time in the military, he worked as a carpenter and went back to the University of Alaska.  He loved school and loved learning. In 1973 he graduated with a degree in Civil Engineering.  He designed several homes for family and friends and helped his brother Don and sister-in-law Jo build their home.  Romar was a gifted carpenter.  During the summers in Fairbanks he loved to play baseball.

In 1979 Romar moved to Edmonds, Washington, where he worked for Howard S. Wright and helped build the Fourth and Blanchard Building in Seattle.  That August his Sister-in-law Jo flew down from Alaska for a Family Reunion in Cashmere.  Romar drove Jo and kids to Cashmere for the weekend.  And that was where he met his “soul mate,” a divorcee with two small little girls, Billie and Tara.  On September 20, 1980 Pam and Romar were married on her parent’s 39th wedding anniversary; years later our Son Tyler was married on the same date.  Three generations married on the same day.  In 1982 Tyler was born and in 1983 Samuel was born.  July of 1984 we loaded up the big blue moving truck and headed to Alaska.

We stayed in Alaska for 15 years.  Alaska was good to us; Romar worked and retired from the State of Alaska.  We made so many wonderful friends.  On November 28, 1985 Romar became a friend of Bill W.  This month he would have had 36 years of sobriety.  While in Alaska, we welcomed exchange students into our home.  They came from Spain, Finland, Iran, Germany, and Japan.  Romar even taught two of the students how to drive.  Life was full and we had so much fun.  As the years passed we found we needed to move back to Washington State, we had grandkids that we wanted to watch grow up and we moved to Richland in June of 1999..  We watched a lot of T-ball, little league, select baseball, high school baseball, Volleyball and football, and Young Marines.  Romar was a very proud Grandpa.

In 2003 his son Tyler went to war in Iraq.  That is when Romar acknowledged that he was a Veteran and that kids of this era would not be treated like he and the other Veterans were treated.  And that, began our life of working with Vets.  We were active in Operation Thank You, Time of Remembrance, Swim to Live, VFW, American Legion, and the VFW Honor Guard.  Our life was full and we did everything together.  He was the Co-Commander of the VFW Honor Guard.  It was so important to honor Veterans and give them full military honors at the time of their death.

In 2017 we bought a Motor Home and traveled all over.  We had so much fun meeting new people and cranking up the music and singing songs from the 60s and 70s.  We laughed so hard and made so many wonderful memories.

Our life was so full and our family kept growing and we were proud to have all of them in our life.  Then Covid 19 hit and life changed forever.   Romar and I had made the best of the time at home.  We talked, we laughed, and we tried to keep in touch with everyone important in our lives.  Romar was a man with a heart of gold, very loyal and very protective of his family.  You never knew if he was telling a story or was telling the truth.  People would look at me to see what expression I had on my face.  He was a wonderful husband, father, grandpa, and great-grandpa.  He loved his sister and brothers.  He loved my sisters and their husbands.  He was the life of the party.  Life was lived full, no regrets, he left a legacy that will never be forgotten.

He was preceded in death by his Father and Mother and his brothers Dick and Loren.

In lieu of flowers, it would mean a lot if you would thank two people that were willing to die for us:  Thank God for a life well lived and the American Veteran for our freedom that we have today.