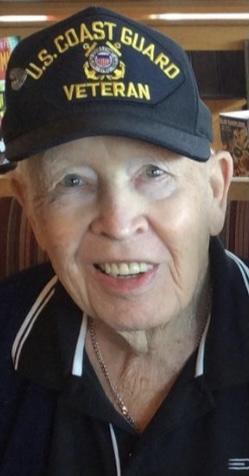 Leonard Leon Davis went to his Heavenly home on Monday, November 15th, 2021 at the age of 94. Leonard was born on September 22, 1927 in Rush, New York. His mother and father divorced when he was very young. His mother worked and he was boarded-out most of his young life. His mother re-married and moved to St. Louise, Missouri where he joined her. They moved to Upland, California when he was 12 years old. When World War II started, Leonard joined the Coast Guard. He was 16 years old and stationed on an APA35 in the South Pacific until the end of the war. He was discharged in June of 1946. He met his future wife Olive Bryant the first week he was home at Cass’s Malt Shop where she worked.

Leonard went to Chaffee Junior College where he played on the National Champion football team as a fullback. Leonard had a lifetime love of football and enjoyed watching college or pro games all his life. When Olive went to work in Trona, California in Death Valley, Leonard followed her. He went to work at the American Potash and Chemical Corp. while she worked as a secretary to the Principal of the Elementary School. Leonard and Olive eloped to Las Vegas and were married on May 3, 1949. They lived in Trona for 7.5 years and had 3 children (first one deceased at 3 months). They were married for 67 years and together for 70 years until Olive passed away in 2016.

Leonard worked hard all his life and kept taking classes to improve his skills. He took an apprenticeship in instrumentation and became a journeyman when he got a job at the Hanford Atomic Plant in Richland, Washington. Leonard and Olive moved to Richland in 1955 where they lived since. Leonard became a manager of the instrument men at “B” plant and then to a maintenance engineer until he retired in 1988.

Leonard enjoyed many interests throughout his life including hunting, fishing, bowling, and golf, but his most favorite was dancing with Olive. They joined dance clubs and enjoyed many years dancing where they won numerous dance contests. Leonard also served on the board of  Hapo Credit Union for 25 years and taught senior safe driving classes through Kadlec Medical Center for many years. Leonard and Olive kept very active with their young friends at Denny’s in Richland and enjoyed spending time there for many years.

Leonard was a very kind, generous, and loving man. He will be greatly missed by his family and friends. Graveside service will be at Einan’s Sunset Gardens in Richland, WA in the Spring of 2022 with full military honors.