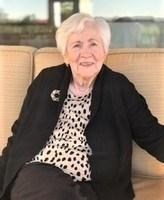 Gertrude (Trudy) Cartmell Felder, loving mother, grandmother and great grandmother passed away peacefully on December 4 at the age of 100.

Trudy was born to Jack and Mary Ella Donahue on June 16, 1921 in Moose Jaw, Saskatchewan, the second of eight siblings. At an early age her family returned to the United States and settled in Longview, WA, where Trudy spent her childhood years. Her family was raised with strong Catholic values which she carried throughout her life, especially while raising her children. The Cartmell family traveled often to Longview to celebrate holidays with over 40 cousins, aunts and uncles, creating many memories for us all. In her last few years, Trudy became the matriarch of the Donahue clan and loved keeping in touch with her nieces and nephews.

Upon graduating from R.A. Long High School, Trudy attended the University of Washington to study the Physical Sciences. While at the UW she joined and has been a lifelong member of the Alpha Delta Phi Sorority. She completed her education as a medical technologist at the University of Oregon Medical Hospital, then embarked on her next adventure in 1944 to work as one of the first medical technicians at Hanford.

While living in Richland she met a young chemist from Yonkers, New York, John Cartmell. John and Trudy were married in Longview in 1947 and raised five children together before John’s early death at the age of 57 in 1974. They were among a group of other young newlyweds who became lifelong friends as couples and then as parents who worked, vacationed, and played together that created a community of families who are still friends today.

Aside from raising her children and supporting all their school and extracurricular activities, Trudy was selfless with her time and readily volunteered for several organizations, while also working as a med-tech for over 30 years. Trudy and John were founding members of Christ the King Catholic Church and Trudy had fond memories as co-chair of early parish dinners; President of the Ladies Altar Society; organizing the Bishops Annual Tea; serving on the boards for both the Benton-Franklin Catholic Charities and Tri-cities Chaplaincy. Trudy was a loving and giving person always putting others needs before her own.
In 1983 Trudy married Frank Felder and they enjoyed 20 years together, traveling, golfing, and playing bridge with good friends such as Jenny and Bob Bixler before Frank’s death in 2004.

She enjoyed watching her children participate in sports as they grew up but also enjoyed participating, especially bridge and playing golf. Trudy was a past president of Meadow Springs Women’s 18-hole organization and especially proud of the fact she made two holes in one in her eighties.