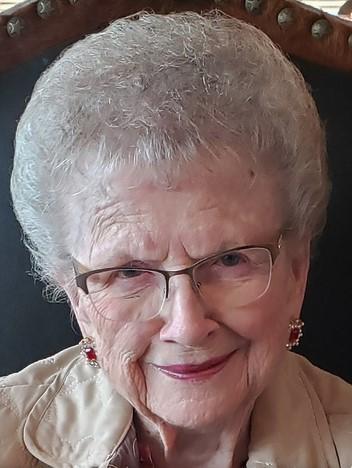 Pasco, Washington – Iola “Tootie” Marie Henne was born May 22, 1928 in Longbranch, WA to Earl and Ethel Seat. She was the fourth of six children. She attended most of her school years in Grandview, WA and graduated from Grandview High School in 1947.

At 13, Tootie had her first part-time job at a small restaurant. During high school, she worked in the spring cutting asparagus, on her parents’ farm and elsewhere. When she was 15, she worked during summer vacation at a small cannery. There, she met the love of her life, Eugene “Gene” Henne. Gene and Tootie dated for four years and were married June 26, 1947. They moved to Pasco, WA in the spring of 1948 and worked for a food processing plant that had relocated from Sunnyside.

Tootie eventually worked for the City/Port of Pasco for more than nine years as secretary to the Pasco Airport manager. She then went to work as a receptionist for Chevron Chemical in Finley, WA, and stayed almost 23 years until retiring as an accounts payable assistant.

Gene and Tootie had two daughters, Sandra followed by Patricia four years later, and were together for 60 years before Gene passed away in 2003 an hour shy of their 56th anniversary.

Family gatherings meant everything to Tootie. Many birthdays and holidays were celebrated in her home, and she enjoyed spending as much time as possible with family. Her grandchildren spent a lot of cherished time at grandma’s house. She loved country music, planting spring flowers, and attending every sporting event and school performance that involved her grandchildren and great-grandchildren. She also enjoyed the many family vacations with Gene and her daughters at various lakes where they camped, hiked, and fished. One of the more recent highlights for her daughters was taking her to Leavenworth for her 80th birthday. It involved horse-drawn carriages, the musical Sound of Music, shopping, and a hilarious episode involving a sausage dog.

Arrangements are being made by Einan’s Funeral Home. A private graveside service will be held December 13, 2021 at 11:00 am. The service will be streamed live on sunsetgardenstricities.com, or it can be viewed at a later time. You may also sign the family’s online guest book.