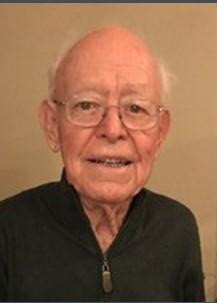 Pasco, Washington – Douglas Alford passed away at Pasco, WA on January 6, 2022 at the age of 96 surrounded by family at home. He was born in Edgeley, ND, the sixth of nine children, on March 26, 1925. After surviving the last five years of dustbowl farming, the family moved to Kirkland, WA and then a year later to Ellensburg, WA. After finishing high school in Ellensburg in 1943, Doug enlisted in the US Navy. Returning from the service in 1946, he enrolled at Central Washington State College and earned a bachelor’s degree in chemistry in 1951.
Midway through college Doug married Beverly May in 1949. Upon graduation, they moved to Richland, WA where he started work at the Hanford Project. In 1954 they moved to Pasco where all five of their children were raised.

Doug enjoyed a successful career spanning thirty-one years, in which he held various supervisory and engineering positions, and later was Manager of Fission Product Recovery followed by Manager of Purex Separation and Tank Farm Operations.

After retiring from Hanford in 1982, he established a wine grape vineyard north of Pasco, utilizing a new concept of drip irrigation. In addition to the vineyard, he also raised potatoes, corn, and wheat.
After retiring from farming, Beverly and Doug took several cruises and a trip to Germany to visit his older brother’s grave. Clifton, a B-17 bomber pilot, was shot down over Germany. Another brother, Clayton, a F4U fighter pilot, was shot down in North Korea, but was recovered.

Doug was preceded in death by his parents, Harris and Mabel Alford, his wife, Beverly, three sisters, Mina, Frances and Marian, and four brothers, Clifton, Clinton, Clayton and Dewayne, and his son, Kenneth.
In his later years, Doug enjoyed many long walks with their little Corgi, Ginger.