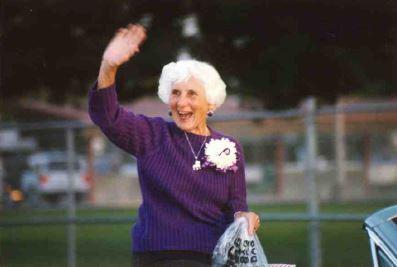 Agnes (Aggie) Catherine Lamb went home to her Lord and Savior on March 26, 2022.

Agnes was born to Mary and James Muscatell on May 15, 1927 in Bismark, North Dakota. She was one of seven siblings. The family eventually moved from Bismark to Washington State. She graduated from Overlake High School in Bellevue before the family settled in Pasco where she married and raised her family.

She met Donald P. Lamb after World War II and they were married on April 14, 1946 and was widowed in 1992. She is survived by her five children who all live in Pasco; Donald (Monica) Lamb, Kathryn Lamb, Steve (Laurie) Lamb, Jack (Connie) Lamb, and Jim (Lisa) Lamb. She is also survived by 11 grandchildren (two deceased) and numerous great, and great great grandchildren.

Aggie’s number one priority was her family. She was an enthusiastic supporter of every activity/sport her family was involved in. She loved cheering on her Pasco Bulldogs. In 2002 Pasco High School dedicated homecoming to her. She was also known for her passion for gardening and that’s where you would usually find her when you visited.  Aggie retired from the Pasco School District after many years of being a cook. Aggie lived a long healthy life until the last year.

A private family graveside service will be held on April 3.  A reception for friends to celebrate her life will be at Events at Sunset in Richland (Einan’s) from 1 pm to 3 pm.

In lieu of flowers donations can be sent to Tri-City Union Gospel Mission.