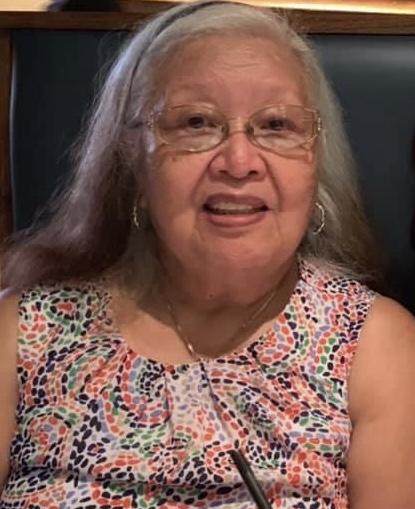 Adelaida Rojas-Reguma Brown, formerly of Mount Vernon, WA, passed away on Wednesday, May 18, 2022, at her memory care facility (Rosetta Assisted Living) in Richland, WA. Adelaida (Leila) was born December 14, 1947, in Luna, Almagro Samar, Philippines.  She married Elden LeRoy Brown in October 1973 and served alongside him as a US Navy spouse for 14 years in the Philippines, Guam, Japan, and Bangor WA. She made friends in each country and remained close to them throughout their lives. Their daughter, Eldena, was born in the Philippines in 1973 and their son, Sir Rasce, was born in Japan in 1975.  Upon Elden’s retirement in 1987, the family settled in Oak Harbor, WA and Leila worked as a horticulturist at Northwest Horticulture (formerly known as Etera and Summersun) in Mount Vernon, WA for more than 20 years before retiring herself in 2010. After they divorced in 2000, her ex-husband’s family never abandoned her and to this day considers her a cherished daughter and sister.

Leila lived in the Oak Harbor and Mount Vernon area for approximately 32 years and enjoyed plants, crochet, puzzles, bowling, camping, fishing and she loved to cook Filipino food for all her friends and family.  She was a huge fan of Elvis Presley; so much so that her little apartment was a living shrine to Elvis.  She is preceded in death by her father Macario Rojas, mother Slaviana Reguma, grandmothers Merle Deardorff & Myrtle Brown, father in-law Ira E. Brown, brother in-law Donald Hulick and grandson Joseph A. Gray.

In her twilight years, Leila was moved out to Richland, WA to live with her son due to suffering from Alzheimer’s, which robbed her of her ability to function independently and of so many of her cherished memories of family and friends. In the 3 years Leila was in Richland she lived with her son until she was placed into a memory care facility that could provide her better daily care. Her son, family and friends continued to visit her up to her last days. Her last visit with family was with her son Sir Rasce on Mother’s Day, May 08, 2022. In lieu of flowers, a donation can be made to the Alzheimer’s Association. https://act.alz.org/donate.