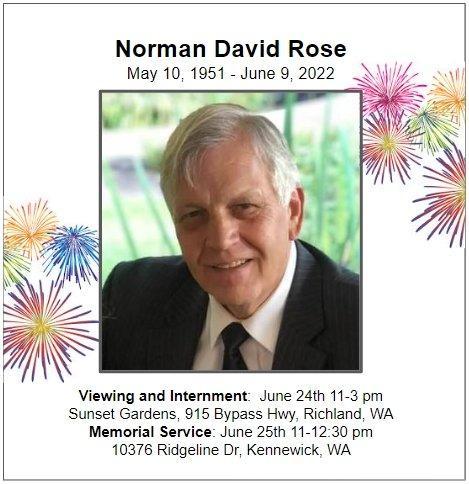 Norm was born to James (Jim) and Norma Rose (née Burke) in Van Nuys, California on May 10, 1951, and was named in honor of his mother. He is the fourth of five children.

Early in his life, Norm developed a passion for printing. He bought his first printing press at 15.  After serving as a missionary for The Church of Jesus Christ of Latter-Day Saints in Washington DC, he attended California Polytechnical College, studying Printing Management.

Norm met Diane in class at Cal-Poly, refusing to return her pencil until she agreed to a date. They were married on March 22, 1975, and sealed in the Los Angeles, California temple. Deeply in love and partners in a wide range of creative projects, during the lifetime of their marriage they would actively seek out new skills, ranging from repairing their own cars to building a backyard pond to raising four children.

Norm was a hard worker, resilient in the face of adversity and a person who provided exemplary effort. In 1988, the Rose family relocated to Portland, Oregon to further Norm’s career in the printing industry. He later transitioned to professional fireworks, turning his life-long love of blowing up things into a career.

Norm was known for being incredibly passionate about service and never hesitated to help others; pitching in to rewire someone’s electrical system, printing custom calling cards for missionaries, or creating fundraising materials for the Scouts. He served as the Oak Hills Homeowners Association president, on the Washington county land-use board and volunteered as a Boy Scout leader. He recently spearheaded the Goose Ridge/Badger Mountain Neighborhood Watch.

Norm charmed many a small child with his Donald Duck voice impersonations. He delighted his family and friends with his many corny jokes, and due to his complete mastery of puns could be considered the father of Dad Jokes.

Norm is survived by his wife Diane, their four children, Nathan (married to Beth), Mathew (married to Melody), Sarah (married to Edward) and Justin (married to Sara), his grandchildren Adam, Trevor, Owen, Ethan, Hailey, Demitri, Dante, Norah, Calliope and Imogen, as well as extended family, friends, mentors, and coworkers he touched during his life, who loved him dearly and helped him become the person he was.