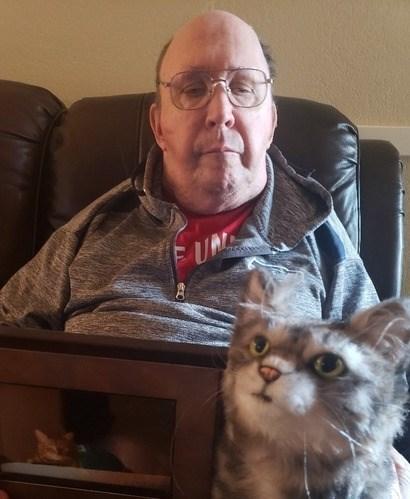 Terrance (Terry) Ray Larson passed away in his sleep early Sunday morning September 25th. Terry was a kind soul loved by all and never met a stranger that did not become his friend. Terry was born in Anaconda Montana on October 16, 1957, to Katherine and Charles Wesley Larson. The family moved to Tri-Cities in 1962. Terry started out young in his love for sports. At 10 years old Terry got involved in Special Olympic events such as swimming, golf, bowling, softball. Later on, he was more involved in basketball, track and field, softball and he really loved snow skiing. Terry competed in local and State Special Olympic events and went to two International Special Olympic events in Minnesota and Connecticut. He competed in weightlifting where he received a medal for deadlifting 500 pounds. While involved in Special Olympics he met Maria Shriver, Arnold Schwarzenegger and the band Hootie and the Blowfish.

After graduating from Hanford High School in 1976, Terry started as a janitor at Westinghouse Hanford he also worked for Kaiser, MSA, Fluor and Akima Terry worked at Hanford until 2013.

Terry was a huge football fan, religiously following the Seattle Seahawks and having attended a few games in person. He also loved Nascar and has gone to races in Las Vegas, Phoenix, Atlanta and the famous Daytona 500, a bucket list event for Terry. He always looked forward to July each year for the Tri-Cities Hydroplane races.

Terry had a severe bus accident in 2008 and was in the hospital for surgery. While recovering, Terry had a surprise visit from Lofa Tatupu of the Seattle Seahawks, with an autographed number 51 jersey and football. Terry has quite the collection of autographed pictures, hats and T-shirts that he was so proud of.

Terry was a fixture in the local Grid Kids football organization. He was the equipment manager, which was a real source of enjoyment and fulfillment, as all the kids loved him. He was involved in the Kiwanis Club of Richland, Kadlec Auxiliary and he was on board of Modern Living Services a housing program for independent living for special needs individuals. Terry was always so excited to help out with the fund raising for the organizations he was involved in.

Terry has had several major medical struggles this last year which ultimately took his life. He will truly be missed by his family and many friends, and we will hold fond memories of him in our hearts.

A Celebration of Life service will be held at Einan’s Sunset Gardens Event Center 915 Bypass Highway, Richland, WA 99352 October 14th. Service from 11:00 to 12:00 reception from 12:00 to 2:00. The family invites you to sign their online guest book at www.sunsetgardenstricities.com. There will be a live streaming of the service which can also be viewed at a later time.