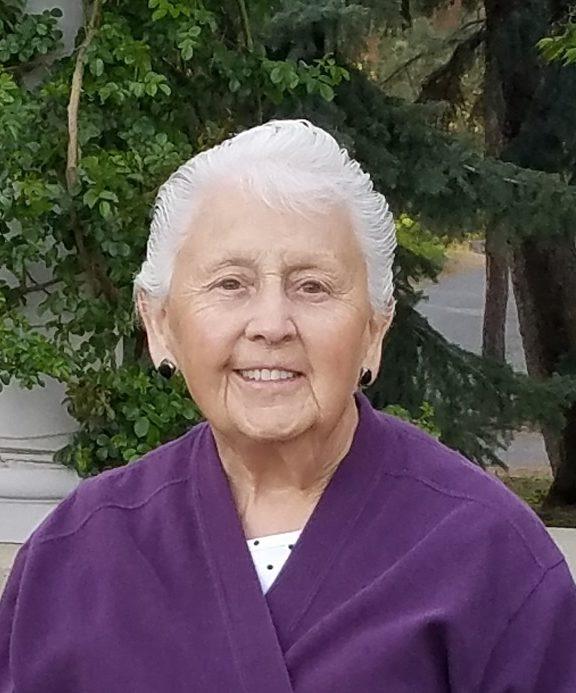 Evelyn “Nadene” Johnson born May 1st, 1934 in Denver, Colorado. She passed away peacefully at the age of 88 on October 21, 2022 of natural causes at the Chaplaincy Hospice House in Kennewick, WA.  She was the daughter of George S. and Edna I. Stevens of Richland, WA. Nadene came to Richland in 1944 at the age of ten with her mother and brother, George B. Stevens. Her father was already here working out at Hanford when they arrived. Nadene met and married the love of her life, Melvin L. Johnson in May 24, 1952 and celebrated 59 years of marriage together.

Nadene as the name she went by graduated from Columbia High School in Richland, WA. She worked doing babysitting and a clerk in a department store in the Downtown Shopping Center in Richland and later on worked at Mayfair Grocery store in Richland as a checker and later after putting in forty years in the retail business retired from Buttrey’s Food and Drug grocery store company. She stayed busy after retirement going to luncheons with friends from school and with others from her work. She had volunteered for some years at Sunset View Elementary School in Kennewick, WA. helping children read. She also loved helping out in the Kennewick Senior Center on Auburn St. in Kennewick, WA.

As for hobbies she enjoyed working crossword puzzles and spending time with her family. She had a passion for collecting novelty collectible spoons. Some she got on vacations; some were gifts from others from their travels.

Nadene has been preceded in death by her husband, Melvin L. Johnson and an infant son, Gary D. Johnson an infant Granddaughter, Jessica N. Johnson.

A private, immediate family gravesite service will be held at Einan’s at Sunset Gardens on 915 Bypass Highway, Richland, Wa. on October 26, 2022.

In lieu of flowers you may donate to Genesis Care Cancer Treatment Center in Kennewick in her Memory.