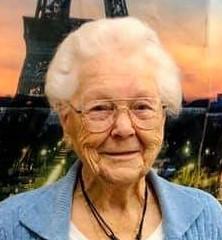 Colene was born on May 24, 1930, in Madison, Kansas, to John Wolfe and Gladys Dickenson, along with brothers Jack Wolfe and George (Babe) Wolfe, and sisters Minnie (Maxine) Martin and Loma Jean Panek.

Colene left school early to support her family and then to raise her own. Colene married Richard (Dick) Alva Rhodes, also from Madison, Kansas, on February 4, 1946. After losing everything to a flood, Colene & Dick moved to Richland, WA, where they had family and promise of work at Hanford. The couple had 3 children, Richard Lee, Norman and Brian Rhodes. Colene worked as a cook for the Richland School District and made her famous chili and cinnamon rolls for thousands of kids at Marcus Whitman Elementary and Richland High School.

Colene was best known for her cooking, her love of fishing and the outdoors, and her art. She was a talented knitter, crafter, and painter until macular degeneration rendered her legally blind. She and Dick built a cabin in the mountains above Cle Elum, WA, where they entertained generations of family and friends, and enjoyed snow-mobiling, bird watching, horseshoes, mushroom hunting, and more, including getting trapped for a week after the eruption of Mount St. Helens. Some of her favorite trips included visits to Mazatlan, Hawaii, and Arizona.

Colene is preceded in death by her parents, husband, and siblings.

The service for Colene Rhodes will be held on Saturday January 14th at noon, with a reception following at West Richland Golf Course.