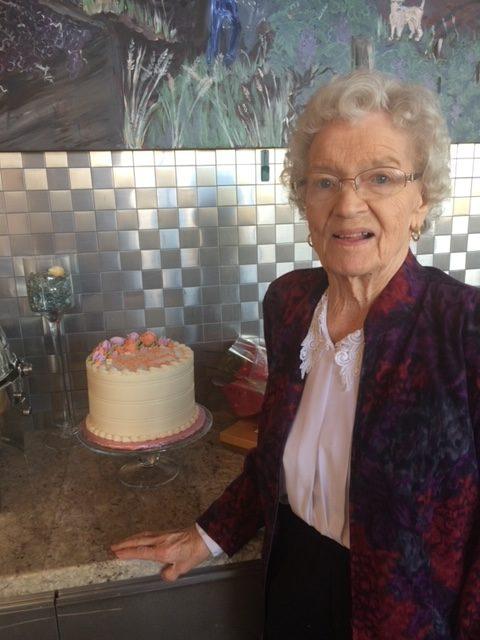 January 20, 1928 – December 4, 2022Olga Edwards passed away peacefully on December 4, 2022. She was born to Olga and Niels Schroder on January 20, 1928. Olga lived in Grimsby, England until her mid-teens when she moved to Chelmsford, England to live with her older sister Ingrid. While living in Chelmsford, Olga was an apprentice in Ingrid’s alterations business and eventually became a very talented seamstress. She met her husband Peter at a dance in Chelmsford and after a brief courtship, they were married on November 24, 1951, at Springfield Parish Church, Chelmsford.

In January 1968 Peter, and engineer, accepted a job in the United States with Westinghouse. They left England with their two children, Craig and Alison and traveled on the Queen Elizabeth II to begin their new lives Greensburg, Pennsylvania. In 1975 the moved again, this time to Richland where Peter worked at FFTF.

Olga was primarily a homemaker but eventually began her own alterations business, working out of her home. Later, she took a position at JC Penney’s as their lead seamstress.

Olga and Peter had a love of travel and had many memorable trips both near and far. Olga will always be remembered as kindhearted and generous and will be wholeheartedly missed by her children, grandchildren, nieces, nephews, and friends. She is preceded in death by her husband, Peter, sister Ingrid, brothers Gunnar and Niels. She is survived by her two children, Craig (Becky), Alison (John), and her three grandchildren: Alexander, Eric (Katlyn) and Kathleen.